Six whole days and not a word from me. Six whole nights and I know you’re just about through. Only my true 90’s R&B fans will appreciate the reference I just made there. 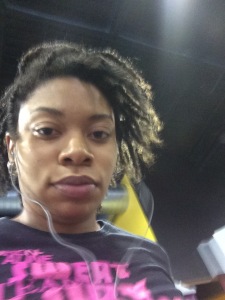 Get it tight, Get it right!

So I’ve been a bit of a gym rat lately. For the past few weeks, the only thing besides my normal day-to-day tasks that I could think about have been getting to the gym, feeling that burn, and wishing that I didn’t feel the burn anymore lol. Last night, as I was lying in bed thinking about how I was going to the gym this morning, I began to think about why I’ve been so into working out lately. The best thing I could come up with besides for trying to get it right and get it tight for the summer is the fact that working out makes me feel like I have control over my body. Last month, I had some things going on with my body that made me feel powerless. Actually, my whole life has been this search for control in some way or another when so often I felt sort of powerless.

I think my thirst for control really hit me when I was telling my uncle about something that I didn’t feel like I had control over and he was like, “Yes, I believe you honey because you love to be in control.” He said some other things too that made me kinda go, “So you’re really in the mood to tell me about myself today huh…” but I guess once you’re over 60, you can say what you want to whomever you want whenever you want to say it. Anyway, back to the topic at hand.

While working out has given me a sense of control over my body, I’ve realized these last couple of weeks that there are some things in life that we simply don’t have control over. And maybe that’s a good thing. While there are a lot of things outside of my grasp, I realize that I have to take charge on the things that I can and let go of the others. I guess that’s why the beginning of the serenity prayer says:

While we’re talking about control, I thought I’d throw in a little 80’s Janet for all of you other control freaks out there. Keep it poppin’ folks;)